The necktie is arguably the single most important accessory in men’s formal wear. It brings all of the colors and designs of the outfit together to create an attractive appearance. But there’s a right way and a wrong way to wear a necktie. So if you’re struggling to master the art of the necktie, check out these unwritten rules listed below. 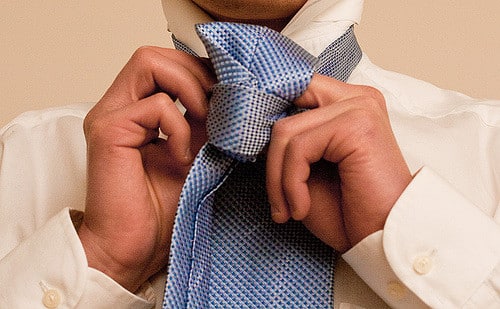 Match Your Necktie With Your Lapels

Think there’s only way to tie a necktie? Think again. There are literally more than a dozen different ways to tie them, each of which has its own unique characteristics. The Four-in-Hand knot, for instance, is the easiest to tie, although some men prefer other knots because of its uneven appearance. The Half-Windsor is a popular alternative. It’s a bit more technical to achieve, but unlike the Four-in-Hand, it creates an even knot in which both sides are equal.

You should also consider the width of your necktie. A good rule of thumb is to stick with a necktie that’s between 3 and 3.75″ wide. The old days of pencil-slim skinny neckties are gone, with 3 to 3.75″ width becoming the de-facto standard.

Consider the other clothes that you’ll be wearing and how they will flow with your necktie. If you plan on wearing a navy blue dress shirt, for instance, it’s best to avoid a brown necktie. Instead, choose a color for your necktie that’s going to match with the rest of your outfit. You can choose a necktie in a color that’s darker than your dress shirt (e.g. a navy necktie with a light blue shirt), or you can choose a completely different color, assuming it matches.

One of the most common mistakes men make with their neckties is wearing them too long. Ideally, the bottom of the necktie should rest at the very top of your belt when you stand. If it protrudes just slightly past, that’s okay. But your necktie goes beyond your belt and down to your crotch, it’s too long and needs to be readjusted.